Race Recap: Four on the Fourth!

This race was just what I needed…a kick in the pants and an running-affirming experience wrapped up in one nice package!

My friend Erin decided at the last minute to join me for the 4-mile run.  She is a great runner and faster than I am, but she’s been battling an injury off and on for the past several months and thus hasn’t been running regularly.  We gave each other our usual girlie “I’m running really slow right now so you’ll have to bear with me” excuses and agreed that we would give it our best shot.

We lined up in the middle of the pack (733 runners in all).  It felt so good to stand at a starting line again and to be surrounded by other runners.  It just made me smile, and I was so glad I’d dragged myself out of bed.  I didn’t put in any music since Erin hadn’t brought any, and I decided not to run my app to time the race.

The first half mile was a mess.  I got a little pissed when we had to pass two WALKERS about five seconds into the race.  I don’t care if you walk a race, but don’t line up that close to the front, people!  As the momentum of the crowd moves forward, you are virtually trapped in those first few seconds, and I almost clobbered those poor ladies.

The course threw us out of the parking lot quickly and right onto the street for a short bit, but they forced us into one lane of traffic.  This was a nightmare, because we were only about a minute into the race, so there was no spread yet.  It was claustrophobic and dangerous with the numerous potholes on the side of the road.  I hope nobody twisted their ankle.

That section of the race didn’t last too long, thankfully, and we were able to reach the wide-open Ward Parkway about halfway through the first mile.  Needless to say, though, I was disappointed with our first mile split.  It had to be around 10:00 with the bottleneck, and since I am a competitive dork, I was unhappy.

Still, Erin and I were chatting it up and quickly settled into a good rhythm.  I thought we did a great job of running in sync together, and we were having fun.  I let my competitive nature move to the back burner for a bit.  We were running reasonably hard, and I was really excited for Erin, who hasn’t run much lately yet was charging along like a beast!  It was so fun to be out racing again and amongst the other runners.  It was good for my running soul…

We hit a loooooooong uphill stretch in the second mile, and though we both talked a good game about slowing down, we actually ended up going faster.  I think we were both feeling pretty good and wanted to make up a little time for the first mile debacle, even though we didn’t say it (and I may be making assumptions here about her thoughts that are way off base!)  We just hung with each other and did a good job working together to pass people.  We only had four miles, right?  That’s not too long to suffer!

At one point, she turned to me and made a comment that she’s been running so slow lately.  I knew what she meant…she was trying to say that her pace was a surprise to her, but it came out sounding like she was saying that our current pace was slow.  A guy behind us yelled (not unkindly, it was funny) that he loved it when people passed him talking about how slow they were running.  We got a good laugh on that one, but not too much because we were working pretty hard for air at that point.

The downhill stretch at about Mile 3 was nice, but doesn’t it suck how an uphill stretch seems to last hours and the same distance on a downhill slope passes by in mere seconds?  Bummer.  Still, we got our breathing back under control and passed a lot of people.  I was feeling competitive again, and once we passed the Mile 3 marker, I was getting all jiggy with it!

And so was Erin, but she did flag a little bit on a tough uphill portion at about the 3.5 mark.  She told me that she was doing fine but not able to go any faster, and she said that I should go on ahead.  I stuck with her (it’s not like I had THAT much more speed in me anyway) and told her that I was her wingman.  Then I started saying encouraging things and little white lies about the size of the hill and how much we had left.  Then I asked her if she wanted me to shut up and she politely replied that yes, she would like it if I remained quiet for awhile.

That made me laugh.  I think I kept talking, though…I am a Helpy Helperton!

We sprinted through the parking lot, under the State Line overpass and toward the finish line.  I was shocked to see the clock and notice that it wasn’t quite to 36 minutes yet.  With the fact that we were so close and that we crossed the line 20-30 seconds after the gun went off, we still had 36:00 in sight!

Because I am who I am and it is what it is, here are my numbers:

Those are numbers I can live with, given my running as of late and our slow first mile.  We kicked ass, in my opinion.  We are totally cool ladies. 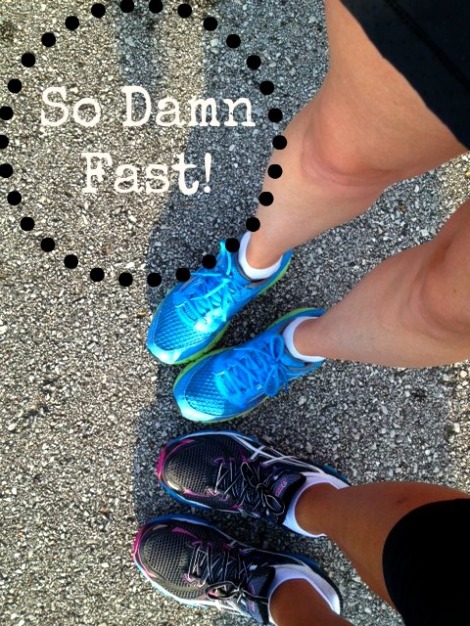 We forgot to get our participant medals, which is a bummer.  Just like the Garmin marathon where I forgot to get my post-race shirt, I left the scene without the bling!

HH teases me and says that no one needs a medal for a 4-mile race.  Of course, I say that anyone who gets out of bed at 5:55 on a holiday morning for a race deserves a medal and much more.

I got a great party pic with the Ararat Shriner’s Hat at least…and you can’t take that away from me.

I was home by 8am and ready to celebrate with my family and our friends.  We had a great day except for a near-death experience when our neighbor’s mortar misfired and exploded all around us.  We survived and my stress incontinence didn’t kick in, so I consider it a win-win!

Last night the boys were with HH’s parents, and we went to see Shakespeare in the Park with Erin and her husband.

Hope your holiday weekend is off to….a bang!  Get it?  I’m so funny.