Thanks so much for the comments and positive feedback on my last post!  I’m glad to see Joy Johnson’s story inspire so many of us!

That post, along with a few others, have led to an increase in followers…yay!  With added readers comes added responsibility, though…I wonder what people want to read about, and I want to make everyone happy.  Do you want to know only about my running, or are you also interested in the other things that make me a very special (read: quirky) flower?  Are you an experienced runner or a beginner?  Maybe you don’t run, and you just think I’m hilarious (thanks, Mom, Dad, and sister!).

I’m going to make it easy for you today:  I’m separating this post into two sections.  One deals with running, the other deals with life and includes a bangin’ recipe for runners that anyone with a taste bud should love!

On to the good stuff… 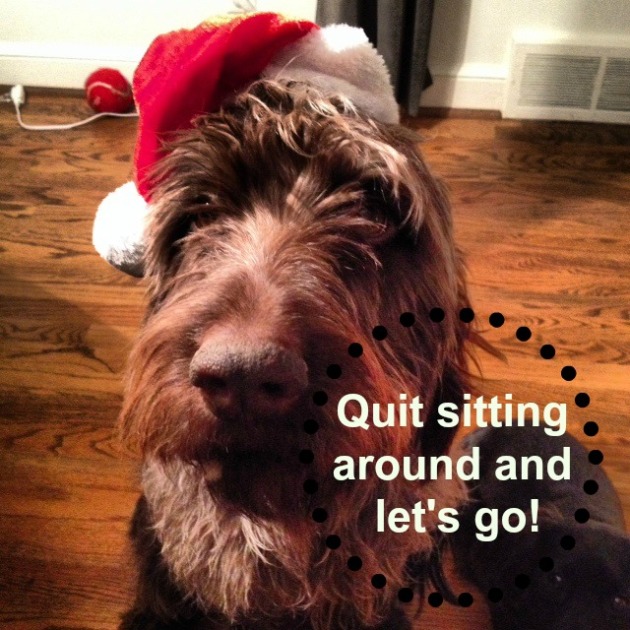 Now, I’d love to be one of those carefree sorts that hops right into her running clothes and hits the door, but that just isn’t me.  As HH (Handsome Husband for new readers) likes to say, it’s a fing space shuttle launch for me to get out the door.  Music, clothes, timing food, timing the bathroom, it all matters.  The most important part, though, is the stretching.

Do you stretch before a run?  Do you wonder if you should?  The controversy goes back and forth, and the current view is NOT to stretch before runs (for example, see this article on Runner’s World, and there’s lots more where that came from.)  Most experts recommend not doing any static or intense stretching but rather to do some dynamic stretching moves.

I can’t run without stretching before, and I don’t run without walking a few minutes first.  I have a lovely routine that I do every time I’m ready to leave the house, but I’m careful not to over-stretch or push my muscles to the point of pain.  I keep it mild, and I keep moving, rarely holding a stretch for more than a second or so.

I stretch my arms, waving big circles forward and back.  I stretch my shoulders and neck, constantly moving, trying to just wake everything up and get out some tension (I’m 40, and things ain’t what they used to be, folks!)  I put my hands on my hips with my feet planted far apart and do a big hula hoop motion in both directions.  It’s pretty nerdy.

Then I work on my legs and ass.  I love this recent video by Runner’s World, and I do these stretches before every run (the pike position is especially great for my plantar fasciitis because it really stretches the foot out.)

(Full disclaimer: My butt kicks don’t look as dorky as the chick’s in the video)

I finish up with some standing quad stretches, and then (finally!) am out the door.

Also, I’m a terrible person and don’t really stretch after.  Sure, I’ll touch my toes a few times, and if I feel my PF or hamstrings tightening up throughout the rest of the day, I’ll randomly stretch, but nothing too much.  I’m such a rebel.

I would love to hear feedback from other runners.  Do you stretch before, after, or not at all?  Do you walk to warm up or just hit the ground running?

What I’m running to:  Darling Nikki by Prince (this song is a good reminder to me as the mom of a 14- and 11- year old that Tipper Gore was wrong and naughty lyrics aren’t the devil, since this was my favorite song in 7th grade and I turned out to be a huge prude), The Wire by Haim (so fun!  Great for being dragged down the street by an insane dog, and the beat will make you think of Heartache Tonight by the Eagles.)

Have you ever seen Meet the Parents?  Remember that scene where Ben Stiller mimics the act of milking a cat? 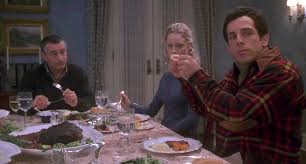 That’s what I think of when I try to squeeze words out of my brain.  I’ll keep you posted.

Ok, so now I get serious for a second.  If you’re a long-term reader, you know that I started this blog to chronicle my training for my first marathon and raise money for my sister TiffeeG’s disease, Ankylosing Spondylitis.  Well, TiffeeG is having a procedure tomorrow called a RadioFrequency Neurotomy or Ablation.

Basically, (brace yourself) the doctor is going to burn the nerve endings coming out of her sacroiliac joints (in the lower back) to try and kill the nerves so that her brain doesn’t feel the pain.  If all goes well, the nerve endings will fry (die, devil nerves!) and stay that way for 10-14 months until they eventually regenerate.

Sounds like fun, huh?  I am praying that it works, and that the pain of the procedure itself is bearable.  I don’t know what they do to help her with the pain of the injections and burning process, but when the doctor warns you that you will think he’s the son of Satan by the time it’s over, I tend to think the worst.  In the past month leading up to this decision, the doctor has injected steroids directly into the joints (in six different places) and also injected anesthetic into the same areas for diagnostic purposes.  Imagine six injections into the base of your spine, into an area that hurts so bad and is so inflamed that you can hardly bear touch and can barely lay on the table in the necessary position.

What do you bring the sister who just had back nerves fried?  I’m thinking Pumpkin Bread and a Booze Tree.  Here are the details…

This Pumpkin Chocolate Chip Bread is from Runner’s World (several years back.)  It is MAGNIFICENT!  I make two modifications to the original recipe…I only use 1 cup of mini chocolate chips, and I use Splenda Sugar Blend for Baking instead of real sugar (3 cups?  Seriously?  Yikes!)

It makes two loaves (bonus!), freezes well, and doesn’t require using an electric mixer (yes, I’m that lazy.)  My kids eat this and are almost convinced that their mom can bake (kids are so easily fooled.  I can barely boil an egg.)

The Booze Tree is a work in progress, and I’ll be sure to show pics when it’s done.  I went to Michael’s and bought a Christmas tree with six little votive candleholders on it.  I’m going to fill them with travel-sized bottles of booze.  Clever, no?  If I could get my hands on high-level narcotics, I’d go that route, but this seems to be the next best thing.