My Mea Culpa and an 80s Playlist Offering

I promise to be a better blogger.  I really do–especially now that I am running again and all healed up from my stress fractures and my entirely mental defeatist running stagnation of late 2014.  I hope you’ll forgive me…especially you fellow bloggers whom I’ve neglected to read over the past two months.  It’s hard to read about running when you aren’t doing it yourself.  If you were celibate, would you want to read about sex?

Some quick life updates and then I will talk about running and humbly submit a great 80s playlist as a peace offering to my readers….

Christmas came and went, along with bouts of typhoid/flu/virus hell for most of our family.  I spent about three weeks coughing like a two-pack-a-day smoker but credit running and strong lungs for seeing me through without an antibiotic.  Take that, respiratory bug!

I have joined the committee for a 4-mile run here in KC called the Trolley Run, and I am thrilled to be part of such a great group and helping with a race for the first time!  This run is in its 27th year and benefits the Children’s Center for the Visually Impaired (CCVI), an AMAZING school that provides services for blind and visually impaired children from infancy through kindergarten.  I believe it is the largest 4-mile run in the country, with over 8,000 runners participating each year.  If you are a local reader or someone looking to visit KC, come run it with me!  We on the committee have been working hard to make sure that this year’s race will be incredible…it’s a flat to downhill course with a fantastic after bash.  What’s not to love, right?  I’ve written a few blog posts for the run (which you can read here and here if you’re interested!),

I am close to opening a cross stitch shop on Etsy and will put info in a sidebar once I have it up and running.  Old lady crafting is a current passion, and I will be able to take custom orders too.  To be fair, I will mostly be offering snarky patterns and song lyrics, so please don’t contact me hoping for an elaborate stitched pattern of a playful kitten and a yarn ball.  Contact me if you want some Kendrick Lamar lyrics stitched up nice and crafty-like.

I turned 42.  Let’s skim over that one.  I tried to look happy about it…and honestly it’s not that bad.  I would rather be the me I am at 42 than the half-formed idiot I was at 22, and I’m knock-on-wood healthy and happy, so complaining about it seems like a waste of time, and wasting time is for suckers.

HH and I played some winter golf this weekend…and wondered why we haven’t moved to Florida yet.

This little beast has decided that it’s fun to snack on poop in the back yard…a real homemade all-you-can-eat buffet!  So much for having a fellow princess in the house…

The other dog continues to volunteer with me each week at a local rehabilitation center.  He is clearly the house favorite.

My love for running has returned after a few months off.  I am definitely slower (like running through Jello slow!), but much happier.  I am trying to take it easy to allow my body and especially my weak feet a chance to rest, build back up, and accommodate the extra pounds I’ve put on from not exercising for several months.  I am scheduled to run the Trolley Run in April, which will be my first race (I think) since last 4th of July’s Ward Parkway Four on the Fourth, where I patriotically kicked some ‘Murican ass and barely snagged an AG medal (all the really fast people must have been out buying fireworks that morning.)

And now, I present on one apologetic runner’s knee, a list of some great 80s songs to kick up your run, including some standards and a few new ideas.  I don’t know if my running playlists ever generate any interest, though my blog stats say otherwise, so if you like them, leave a comment, tweet me a pic, or send a shoutout to @TwistedSwisster (bonus respect to anyone who runs in pegged pants or one-shouldered sweatshirts!)

Part One:  Betcha no one runs to Midnight Blue, but you can’t go wrong with that song.  He ain’t got no regrets, and he ain’t losing track, and neither should you.  Your following days are over, baby, now you just gotta follow through!

Part Two:  A bunch of somewhat obvious yet totally bitchin’ running staples, and they’re solid gold just like the dancers. 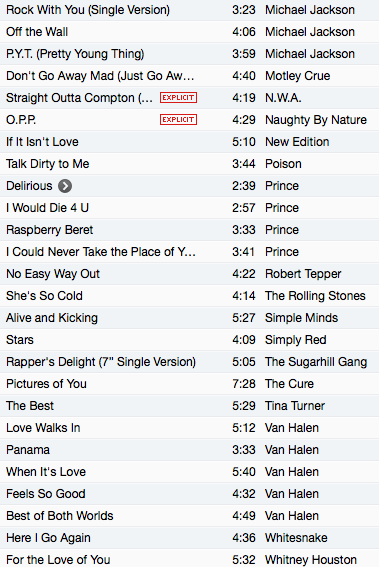 As always, thanks for reading and HAPPY RUNNING!  You’re simply the best!

41 thoughts on “My Mea Culpa and an 80s Playlist Offering”

Your turn to talk! Cancel reply